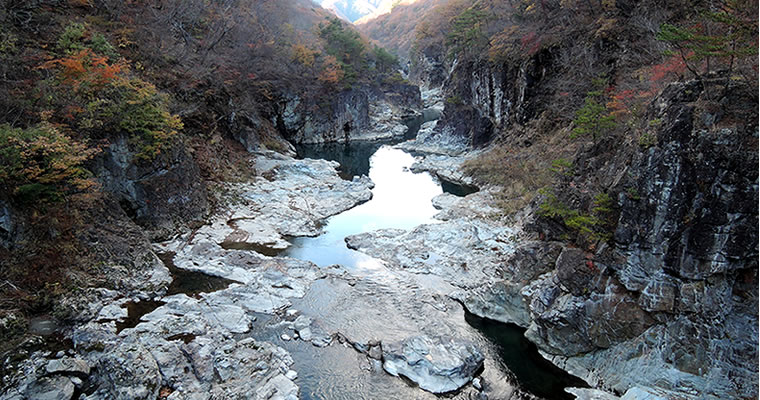 Autumn-leaf viewing spots in Nikko are widespread in the mountain area at the altitude between 600 and 1400m, and the best time of the season varies from the place to place there.

Autumn is the best season to visit Nikko

With the arrival of autumn, the time has come to enjoy the colorful leaves here in Japan. Autumn-leaf viewing is undoubtedly a Japanese tradition that gives us the feeling of the season. Nikko area, situated in the northern region of the greater Tokyo, in Tochigi prefecture, is one of the most favored viewing spots among the ones in the region.

Nikko area comprises of several areas boasting attractions from the historic temples/shrines of the Tokugawa shogunate, the scenic mountains with views of waterfalls, to the day-hike trails in the national park. In autumn the leaves turning red and yellow highlight the beauty of nature there, Nikko can be at best to visit around the time of the year.

The viewing spots in the Nikko area are in the mountains at the altitude of between 600 and 1400m (approx.1968-4593ft), and the best season for fiery foliage varies slightly from each. If you visit Nikko for fiery foliage, it is suggested you keep in mind the differences when you plan it. Also, remember Nikko in autumn is known for the heavy traffic jam, and here you find some of the travel hints that will be a little help.

Note that the best season may vary every year. The information here is only as a guide. The areas are divided based on the information about Nikko on this page;
Nikko City and Nikko National Park | Areas and Attractions

The famous five-storied pagoda of Nikko Toshogu Shrine stands at an altitude of around 630m to 640m (2066- 2100 ft), almost the same elevation as the peak of Tokyo SkyTree tower. You can expect the best season in this historic area will be coming up around the beginning of November, about one month earlier than central Tokyo.

2. Chuzenjiko Lake Area 中禅寺湖(ちゅうぜんじこ) エリア
Around early to middle October
Chuzenjiko Lake is a crater lake at an altitude of 1269m (approx.4163 ft), lies at the highest place among other lakes in Japan.

The winding roads leading to Chuzenjiko area from the historic area are called Irohazaka Slopes, and heavy traffic jam happens on the oneway roads during the autumn season. There are two Irohazaka slopes between the areas; Dai-Ichi (First) Slope accessible from Chuzenjiko to the historic area, and the other is Dai-Ni (Second) Slope from the opposite direction. Along the way on the second slope (Dai-ni Irohazaka), there are famous sightseeing spots such as Kegon Waterfall and Akechidaira Ropeway. A long line of cars waiting for parking there is one of the causes of the heavy traffic on the road.

It seems the traffic jam is not avoidable during the season, but one suggestion is that earlier you head for the destination in the morning is better. Avoiding a trip on the weekend will also be advisable.

3.Senjogahara Area 戦場ヶ原(せんじょうがはら) エリア
Around early to middle October
Lies at an altitude of 1400m (approx.4593 ft), Senjogahara Marsh has walking trails suitable for both beginner and advanced hikers. If you are a hiker who only like walking rather than viewing autumn leaves, summer can be the best season to visit.

4.Yumoto Area 湯元(ゆもと) エリア
Around early to middle October
Oku Nikko of Yumoto Area is deep in mountains at an elevation of about 1600ｍ(approx.5250 ft), known as a place for a summer retreat where autumn comes earlier than other Nikko areas.

5.Nikko Kinugawa Onsen Area 鬼怒川(きぬがわ) エリア
Early November
Kinugawa is a popular hot spring resort town within easy access from the historic area and lies at the almost same elevation. Tourists staying at Kinugawa for a retreat can enjoy activities other than soaking in hot springs, such as visiting the historic area for sightseeing and hiking at Ryuokyo valley.

6.Kirifuri Area 霧降(きりふり) エリア
Middle to late October
Kirifuri Plateau is situated in the north of the historic area, has many waterfalls on the way there. Traffic is less dense compared to the Irohazaka Slopes.