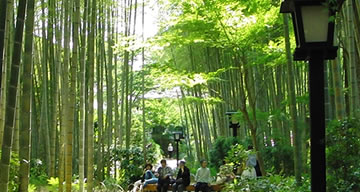 As the same as using stars for rating hotels or restaurants, for example, 5 Stars, 4 Stars, 3 Stars, etc., there is a traditional ranking system in Japan. Three names of trees are used for the rating, which are; Matsu(pine tree), Ta-ke(bamboo), and Ume(plum tree).

These names have the same meaning as the number of stars used for ranking cuisine at Japanese restaurants in the traditional style. Although this ranking system is rarely used by now, you might still find these names in the menu when you go to a restaurant, like Unagi, Sushi, or Kappou restaurant.

In most cases, the quality is basically the same for all of them, but the quantity or assortment of foods in dishes is different.

So, if you go to a Japanese restaurant, you might see Matsu Ta-ke and Ume on the menu, and a server might ask, "Which do you like to have? you have 3 selections Matsu, Ta-ke and Ume."

In each case, you can select one that you like to order.

Well, even if you forget about Matsu, Ta-ke, Ume, you will find the difference by seeing the price. : ) Anyways, this would be of help when you go to a traditional Japanese restaurant in Japan.