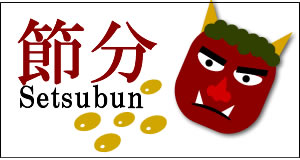 Setsubun is a traditional event held every 3rd of February, the day of turning of the season from winter to spring under the Japanese lunar calendar.

What will Japanese people do on the Setsubun?

On the day of Setsubun, people throw parched soybeans inside and outside of the house to drive out demons (bad luck) and to welcome in good luck, and this custom is called Mamemaki 豆まき. Also, there is a traditional custom that people eat as many beans as their ages to pray for their future well-being. If you are wondering why you see a stack of soybean bags sold at supermarkets only around this season, this will help answer your question.

The number of people who do the bean-throwing at home is getting fewer as it is bothersome having to clean up the cracked beans spread out all around rooms afterwards. Instead, another custom is getting popular that is to eat long Norimaki (Sushi rolls) on Setsudun day, this new custom must have been created for the market expansion of Norimaki.

If you want to experience Mamemaki, just visit large temples or shrines on the 3 of February, where the Mamemaki festival will take place. At the festival, you are not to be a bean thrower but bean "receiver." Beans are thrown from the stage of temple/shrine building by renowned people; Sumo wrestlers, Kabuki players, and TV personalities, and the throwers sprinkle beans with tiny gifts toward visitors who are the receivers excited at trying to get the gifts among jammed crowds. Watching at the excitement, it always makes me wonder why Japanese people, who stay calm even in disaster, can get that crazy at Mamemaki. The gifts being thrown there might be something really special.