Things to know about local route bus services in Japan 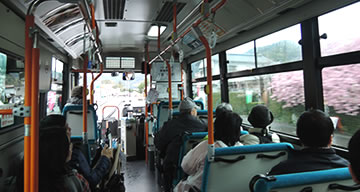 Though the rail network in Japan is dense, there are cases you need to take a local bus to get to your travel destination from the nearest train station. A bus ride in the countryside can actually be enjoyable while talking with the locals and viewing the idyllic landscape.

How do you take a local bus without confusion?

In Japan, the local bus system varies depending on the bus company or the area where the bus is served, and it makes even Japanese people confused when they use the service at a new place. The information here will help you understand what you should keep in mind when using the system. 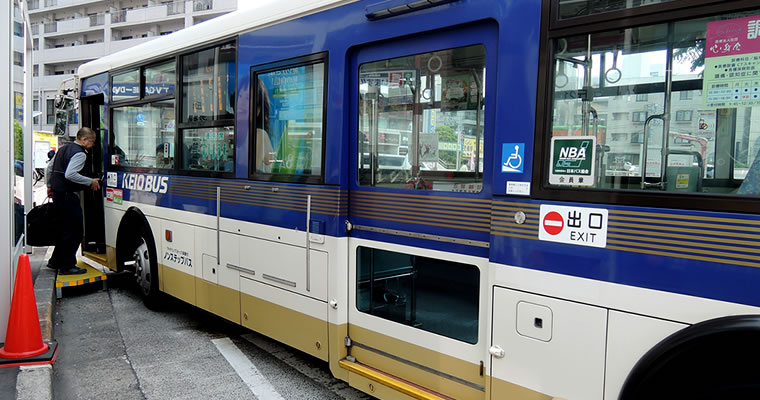 Japan is left-driving country. Bus stops are always on the left side of roads.

Those coming from right-driving countries may get a bit confused at the beginning of the trip in Japan. Just be sure not to mix up right-hand and left-hand traffic when you wait at a bus stop. It can be a big trouble if you make this simple mistake when you use the bus served only a few times a day.

Flat fare, pay-first is the system for the use of short-distance route bus service. The fare of long-distance buses vary depending on the traveling distance, is paid when getting off.

As for the long-distance route bus, the fare varies in accordance with distance ranges and is paid when getting off the bus. When you board the bus, get a ticket (Seiriken) at the entrance door. The number printed on your ticket tells the fare between the points where you get on and off. The ticket is collected when you pay the fare. If the bus fare is payable by IC Card, such as Suica or Pasmo, just tap your ID card at the entrance instead of taking a ticket. For example, Nishi Tokyo Bus, operated in the western area of Tokyo, is served in this bus system.

The bus ride system varies depending on the bus company.

This is actually what most people get confused when taking a bus at a new place. It makes tourists a bit nervous sometimes. Knowing of three types of boarding systems will help you avoid confusion. 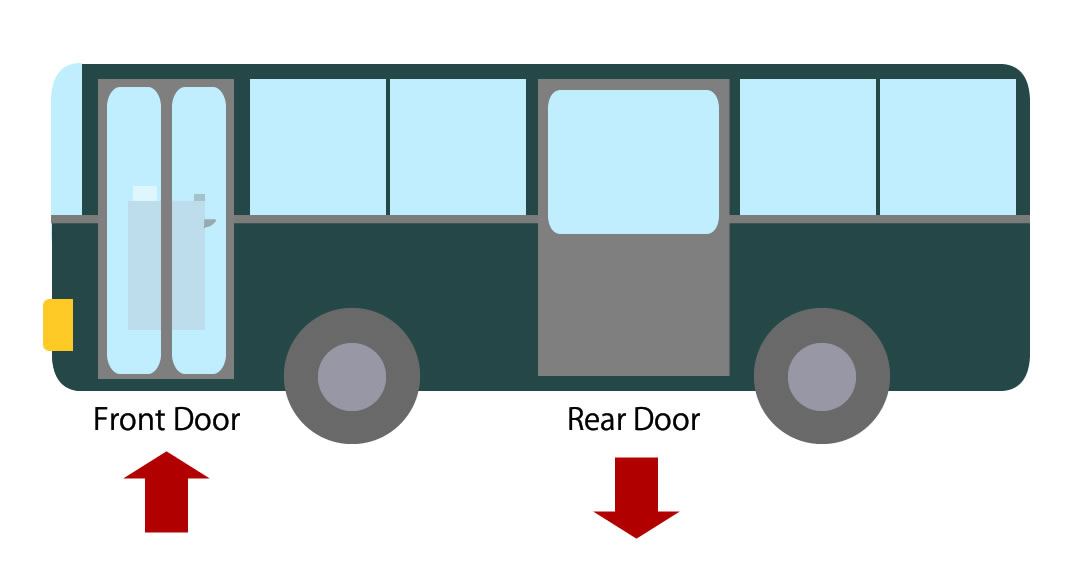 The short-distance route bus, with a prepaid and flat-fare system, is usually operated in this way. Pay the fare when you get on the bus from the front door. The farebox is next to the driver’s seat. The fare is often payable by IC cards too. 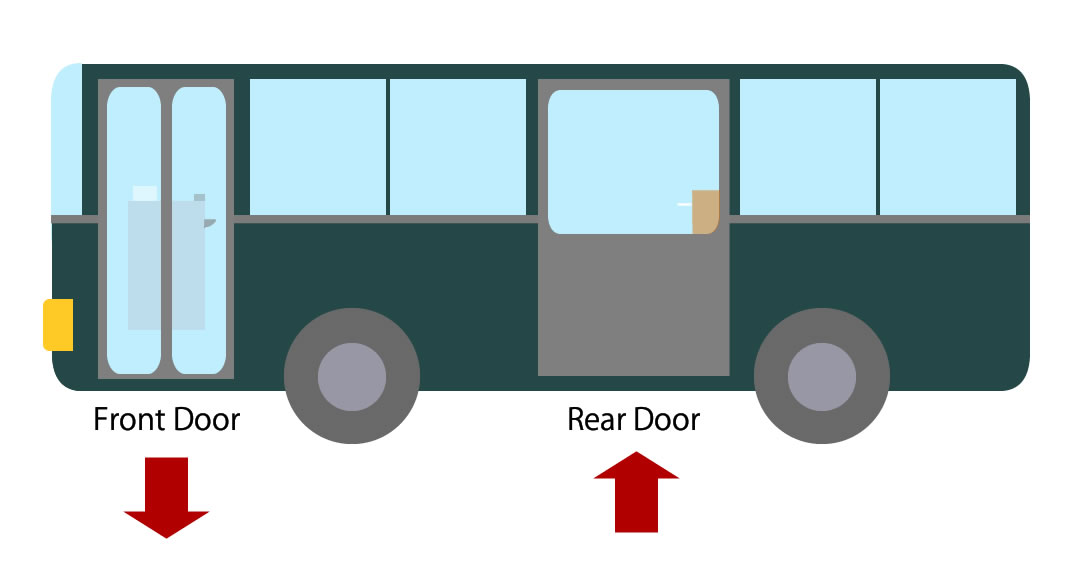 You can often find this riding way when you take a long-distance route bus. The fare is paid later. Take a ticket (Seiriken) at the entrance when you get on the bus. If the bus fare is payable by prepaid IC card, just tap your ID card at the entrance instead of taking a ticket. 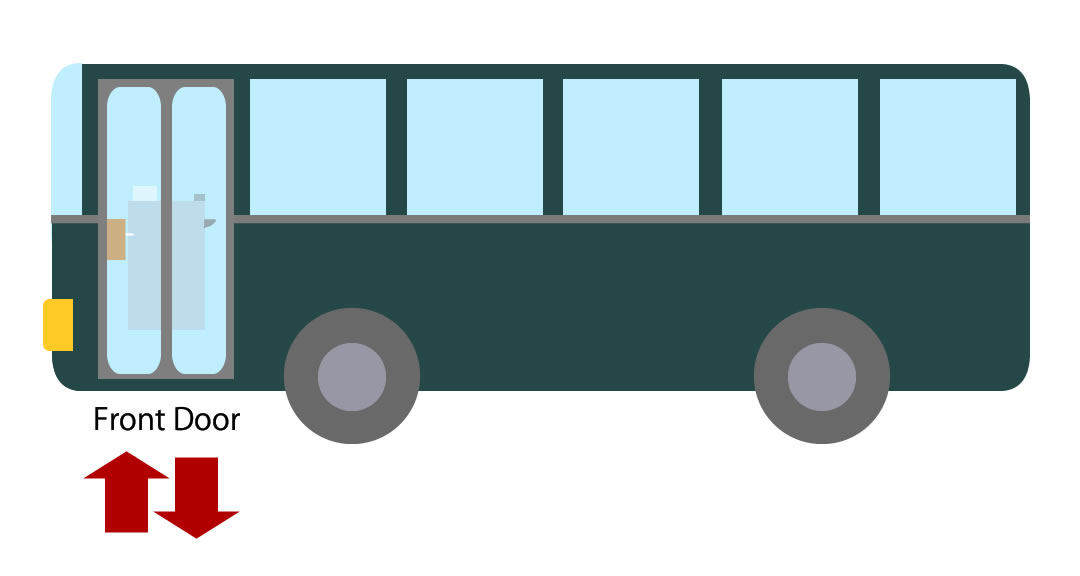 You can find this riding way when you take a long-distance bus having passengers infrequently get on and off. Take a ticket (Seiriken) at the entrance when you get on the bus. The ticket machine is near the farebox. (Commonly on your left) . The fare is paid when you get off the bus.

Be careful not to misread the timetable, provided for weekdays and weekends

Bus operators provide weekday timetables and weekend (holiday) timetable, and some of those timetables are entirely different each other. If you misread the timetable, the chances are that you have to change your overall travel plan. Timetables at bus stops are commonly in Japanese, so it is better to understand some Japanese words, such as "Weekdays 平日", "“Saturday 土曜日” or “Holidays 休日 (祝日)”, to avoid misreading.

To know which bus you should take, ask someone by letting know your destination

There are buses bound for the same place but run on the different routes. It can be secure to ask someone with saying “Kono Basu wa [your destination] made Ikimasu ka?” means “Does this bus go to [your destination]?” 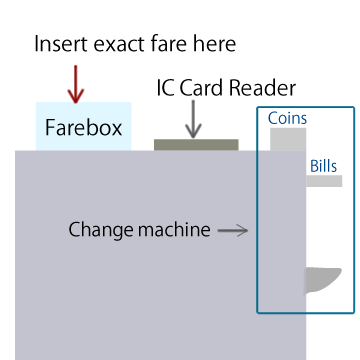 On the bus served at a flat rate, such as Toei bus in Tokyo 23 wards, you will able to use the change machine to pay the fare. If you put money into the machine, it automatically collects the fare and gives you the change. (5000 and 10000-Yen bills are not accepted).

The bus payable by IC Card has an IC reader equipped aside of the farebox, accepts payment by IC Cards such as Suica, Pasmo.

How to pay the fare on the paid-later bus

The ticket is collected when you pay the fare.

YouTube by Nishi Tokyo Bus: Advice on taking the Nishi Tokyo Bus
https://youtu.be/DE0BwFx9W5M
Nishi Tokyo Bus is served in the west of Tokyo prefecture, has routes leading to hiking spots in the mountain area, including Mt.Mitake and Mt.Takao.

How to use Toei Bus by Bureau of Transportation. Tokyo Metropolitan Government
https://www.kotsu.metro.tokyo.jp/eng/tips/
Toei Bus is operated within 23 Wards of Tokyo, and the network is dense. You can reach almost anywhere in this area by taking the Toei Bus. For tourists, Toei Bus One-day Pass is a fantastic value.

Last updated: June 2020
This article is also available in Japanese